I was going to share the graphic, along with a few words on Facebook. Those few words trickled out until they hemorrhaged through my keyboard. Sorry for the TMI, but it’s my truth.

So now instead of a few sweet words and a graphic, you get a very real, not sweet moments of my life in a blog Op/Ed. I hope that you can share your truth so that we all stand up for what is being done to us and against us in this moment of history.

For the woman who has a miscarriage, where the body expels non-viable embryo or fetus, it is called a spontaneous abortion. I wonder how many of these bible banging hypocrites know their wives have had an abortion… against their will at that.

In 2006 I found out I was pregnant, only to miscarry shortly thereafter. It was an ectopic pregnancy which is when the fertilized egg nests in the fallopian tube rather than in the lining of the uterus. Normally an ectopic pregnancy doesn’t miscarry, but rather creates a life-threatening situation where the size of the embryo exceeds the interior width of the tube causing it to rupture and leaving no other choice but emergency surgery and in most cases, having the damaged fallopian tube to be removed.

Mine was unique in that I miscarried before it gained enough size to create the aforementioned situation. Generally, after a uterine miscarriage or abortion, a procedure known as a D&C (short for dilation and curettage) is performed to ensure that the uterus is completely cleared out. In my case, this was not an option because you can’t do a D&C on a fallopian tube, and while my tube had not ruptured, the threat was still there because any “residual cells” could continue to grow and rupture the tube anyway.
My husband and I went home that night from the ER, devastated and grieving for the child we had lost. A child who never got named anything other than “spontaneous abortion”. The following day, we were set to return for their improvisational treatment to address my unique situation, a course of chemotherapy that would retard and eliminate the growth of any “residual cells”.
In one of the cruelest situations of my life, I was to go – not to the cancer ward to have the chemotherapy administered – instead, they sent me to the OB/GYN department, where I got to sit at eye level with every pregnant belly, every inverted turkey-timer looking navel. And just when I thought that fate couldn’t get much crueler, the nurse came over with a clipboard with paperwork for me to complete, one of which was an authorization for an abortion.
The only word that applied then, and now, is “mindfuck”.   And the fun was just beginning… I started with the “I’m pregnant” pukies, only to be followed by the “I’m not pregnant anymore” pukies and the “chemotherapy” pukies. And just when you want to crawl inside a hole and die or find some way to hide from the people who knew you were pregnant and now ask how you’re doing… it got worse. I had to go for weekly blood draws to monitor my HCG levels.
HCG is the hormone that is detected in a pregnancy test. You see, my “residual cells” were still causing me to have those. And those weekly blood draws were to make sure that my HCG levels were staying the same or declining because there was still the chance that they could increase. If they did it would mean that my “residual cells” would be increasing in volume and surgery to remove them. 14 weeks. 14 weeks before my HCG levels finally started tapering off and maintained a steady decline.
I was pregnant, had a spontaneous abortion, had to give consent for them to perform an abortion, all while spending 14 weeks waiting to find out when I would finally stop being pregnant. I am pro-choice, but this was not my choice, far from it. The 11-year-old who was raped and is now pregnant, that wasn’t her choice either.
And now she gets to spend every day reliving the horror as her body continues to remind her of the worst day of her life while people force her to endure this day after day. Only for her to finally deliver (c-section would be my guess, 11-year-old bodies aren’t really ready to carry and naturally deliver a full-term child). So even if she is able to deal with the additional anguish of giving the child up for adoption, she’ll have that scar to give her warm memories of happier times, huh?
Silly me, I almost forgot If she does wind up keeping the child, she gets to co-parent with her rapist. Won’t that be fun?
Thanks to all the men who keep making laws about shit you don’t fucking have a clue about and the torture you inflict on others with your overblown sense of morality.
Fuck you. 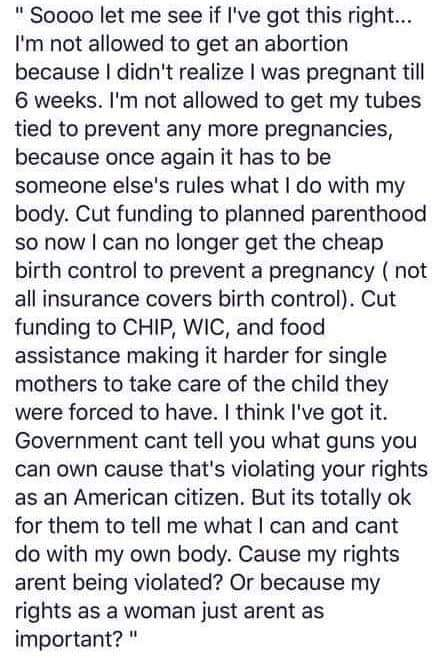 Now that you’ve read my story, ask yourself where I would be in a state like Alabama if you were the doctor and what would you be allowed to do to treat me.

I mean that truly to be devoid of personal beliefs and judgment, just what you need to do, as a physician, to treat your patient under the mandate that if you perform, aid or assist in an abortion, then you are subject to personal liability and criminal prosecution. Tell me how you would have treated me or better yet if I would have lived.

Also, in the back of your head hold on to the thought that in Mississippi several years back they tried criminalizing abortion to the point that if a woman had a miscarriage that she would be charged with manslaughter.

It’s a very tangled issue, and blanket statements and legalities that don’t accommodate for cases of rape, incest, the viability of the fetus, the overall health and survivability of the woman just confuse and muddy the situation even further.

Abortion is not just some person who was too lazy to take birth control but doesn’t want kids.   And for the record, men are largely responsible for unplanned pregnancies.

I'd love to hear your thoughts, please leave a reply. Cancel reply