As little as 40 years ago, it was not considered out of the ordinary for a doctor to treat patients as “less than”, woman especially because we had a society that regarded marriage as ownership.  Their voices were ignored and they were treated as though they were mentally damaged and didn’t have the capacity to understand what they were being told, so the husband did the answering and the ordering.

One where the husband was the one making decisions for his wife, rather than what the woman wanted/needed for herself.  Going back a little further you had instructions on how to behave for your husband and how he may discipline you.  Believe it or not, spanking a wife was somewhat commonplace (and it had nothing to do with 50 Shades, for those wondering.)

My mother and my Great Aunt were both overlooked as their husbands were asked for a medical authorization.  Back then a husband could call the doctor and get test results, find out how their office visit went, etc and make decisions for his wife going forward without the slightest bit of input from the one receiving the care.

Another Great Aunt was taken by her husband (because she wasn’t “allowed” to drive, his rules) to the dentist’s office to get a filling in her tooth.  Her husband asked what condition the rest of them were in, then with that information told the dentist to remove all of her teeth and give her dentures because he didn’t want to be dumping a bunch of money on his wife’s dental care.

Can you imagine being in the dentists’ chair waiting for your tooth to be drilled, only for the doctor to come over and just started pulling her teeth!  She was 25 years old and had absolutely no say in the matter, her husband told him what to do and that was the end of the discussion.

That time is gone.  Thank the gods. 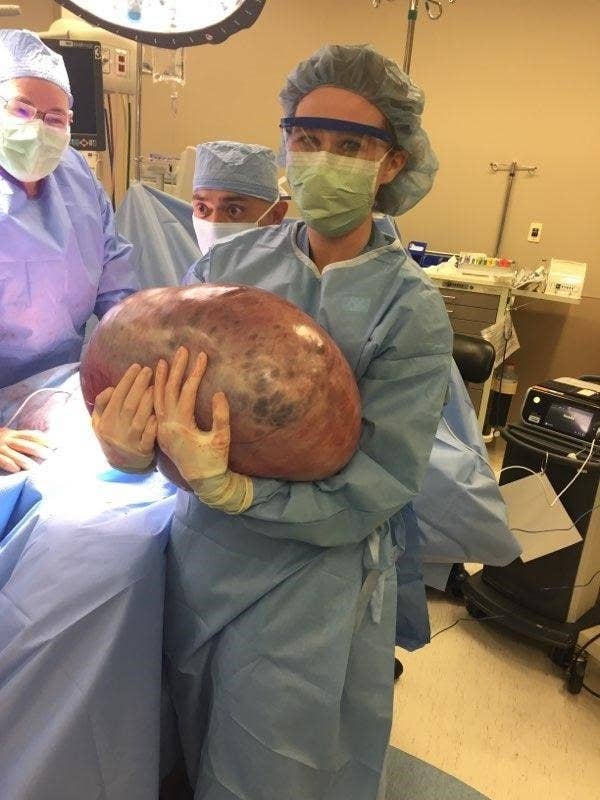 Woman With A 50-Pound Ovarian Cyst Was
Initially Told To Just Lose Weight!!

We also used to be a society where doctors weren’t questioned, much less second-guessed because he was seen as the demi-god of treatment and healing.  My grandmother wound up with chemical burns and needed skin grafting due to a definite case of malpractice …but you didn’t pursue that back then. (This was when the nurses still wore white.)  Frankly, if doctors were all that, there’d be no need for medical insurance.

Thankfully, now we encourage second opinions on major issues or procedures, and especially surgery.  You must be your own advocate, no one else will be.  Remember that you are not at the mercy of your doctor.  He works for you and you pay your premiums to the insurance company so they can pay for your assorted medical needs.

They work for you

I saw the article about this poor woman with the cyst and I flashed back to all those terrible stories.  And of course, if a woman appears to be overweight, then she just needs to get off her butt and do some exercise.  This is something that would have been seen on a simple office ultrasound, but no, she needed to go on a diet.  This woman knew something was wrong with her body, but the doctor dismissed it.

There’s a number of different things that can cause weight gain in a centralized area like that, but he didn’t bother to check for any of those either.  Hell, I have a cousin that was used to her weight fluctuating so she just wore bigger baggy clothes.  That is until she was in so much pain that she thought she would die and they ran her to the ER only to find out it wasn’t her appendix bursting, it was that her water needed to break since she was in active labor.  But the whole time she was being told that she needed to exercise more, that she was getting fat.

The next time you know that something’s wrong with your body and it’s a significant issue and your doctor blows you off, tell him that he needs to prove you wrong, he needs to run the test to see if there is an underlying cause and not just chalking it up to overeating and under-exercising.  You have to stand up for yourself, don’t let them “tell you”, have a conversation with them.  Ask them why they feel that their diagnosis is the best for describing your current health.  Ask if there are any tests that can be done that can confirm or rule out things so you’re not waiting until something gets really bad.

I’m looking at having surgery this fall, my best friend is coming down to go with me to the surgeon’s so he can be my extra eyes and ears.  If you’ve got a friend or relative willing to do that for you, great.  I also used to carry a 3-ring binder with test results and whatnot in it.

Even now I have a small notebook in my TN that I am writing in regularly.  Appointment times & dates, recap the appointment, then I add what comments or questions that I want to address with them on the next visit.  Talk to them as peers, not as a subordinate waiting for the crumbs they throw you.

Have a good day and take it easy.

2 thoughts on “Be Your Own Advocate!!”

I'd love to hear your thoughts, please leave a reply. Cancel reply